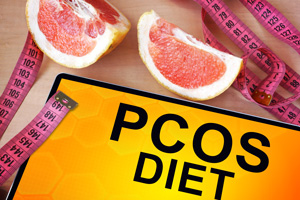 My interest in PCOS started way before my residency and fellowship.

In fact, my senior medial school research project was on that topic.
Perhaps it is because PCOS is the most common cause of female infertility in the USA. The Centers for Disease Control (CDC) estimates that about 6-12% (5 million) of US women of reproductive age have PCOS. The exact cause of PCSO is not known, but it is a hormonal disorder that is thought to have both a genetic and environmental component, much like many medical disorders.

Women with PCOS often have higher levels of male hormones, also known as androgens, and insulin resistance (IR) which drives the phenotype of this disorder. Due to these endocrine problems, women with PCOS often have irregular periods, excess hair growth which is distributed in a male pattern on the face and body, obesity as well as an increased risk for type 2 diabetes.

The diagnosis of PCOS can be elusive because every woman with PCOS does not necessarily have unwanted hair growth or irregular periods. One of the key findings in women with PCOS is insulin resistant and elevated insulin levels for which there may be a lack of physical symptoms. For this reason, it is important to see a doctor who specializes in endocrine disorders such as a medical endocrinologist, gynecologist or a reproductive endocrinologist.
Because PCOS is a syndrome, there isn’t a single test that can be done to make the diagnosis. There are diagnostic criteria which is named the Rotterdam criteria for the diagnosis of PCOS. This includes evidence of elevated androgens, either clinically or in a blood test, irregular ovulation and a pelvic ultrasound showing ovarian polycystic morphology. Two out of three qualifies you for a PCOS diagnosis.

A very popular diet today is the ketogenic or keto diet. The idea of this diet is to burn fat by staying in a state of ketosis when the body begins to burn fat for energy because it does not have enough carbohydrates to burn. Studies have shown that the ketogenic diet can lead to weight loss and improves IR, a driver of fat storage. The Keto diet is a very low-carb high-fat diet which does not restrict calories, but rather the quality of foods. There are many books/blogs/YouTube videos dedicated to keto diet recipes with dos and don’ts. The question is, is a keto diet a good diet for losing weight in women with PCOS. In theory, it is, as it burns stored fat and reduces insulin. A small case study at the Cleveland Clinic has shown promising results of weight loss in women with PCOS with the keto diet. Four women were followed for six months on a ketogenic diet at the Cleveland Clinic’s Obesity and Weight Management program. All four women lost between 19 and 36 pounds; all four women had a resumption of regular cycles and two women conceived spontaneously.

As a board-certified fertility specialist, I see many female patients who have been diagnosed with PCOS simply because they were obese, or young women who have a very good ovarian reserve and their ovaries look “polycystic”. With PCOS, “looks” do not count and it takes more than just a BMI or pelvic ultrasound to make the right diagnosis and provide the right treatment. Obesity and PCOS are mutually exclusive; however, there is a lot of overlap.

If you are experiencing any of the symptoms of PCOS or have been diagnosed and experiencing infertility issues, it is time to schedule an appointment. At Conceptions Florida, you will benefit from the many treatment options that are specifically tailored to each patient, from weight-loss counseling, pre-pregnancy counseling, and fertility treatments.